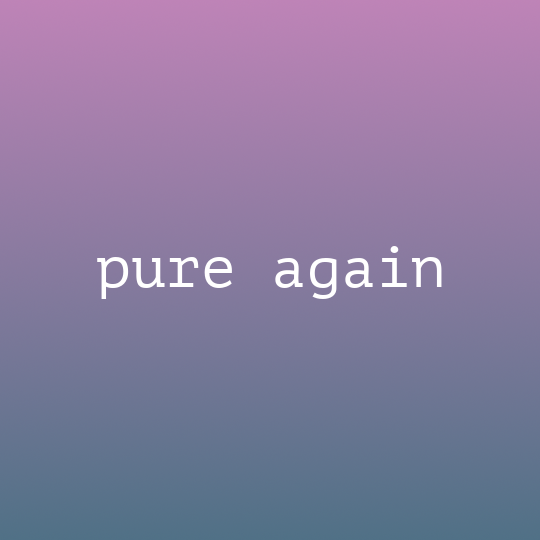 Remember when twine was a big deal? I was eighteen and knew nothing about games or coding, but I was trans, which back then was all you needed.

I'd been waiting on HRT for three years; dysphoria and frustration crystallised into Pure Again. Like everything to emerge from that scene, it was heavily influenced by Porpentine, who was also responsible for people reading and liking it.

People have told me this twine helped them make up their minds about transition. I felt weird about that when I detransitioned two years later.

In 2016 I reposted it to philome.la with a new postscript (see below) and a few minor cosmetic changes. You can still play the original version here. As with all my twines, the music currently doesn't work, but 'Transgender' by Crystal Castles originally played over the credits.

Three months after writing Pure Again, I started testosterone. I took it for two years before deciding to detransition.

When I transitioned, it was an attempt to escape the body I was born with. It took me a while to realise that this is impossible, and that chasing after something impossible was only going to deepen the hurt. I talked to women who have learned to embrace being female in spite of their dysphoria, and I decided to try. It's not easy, but at least it's not impossible.

Pure Again is a fantasy of escape from dysphoria. Transition couldn't provide that for me in the real world. That doesn't mean you should give up on it, or that we can't both still enjoy the fantasy. But the story branches more than I realised at the time; we could have more than one route to a happy ending.